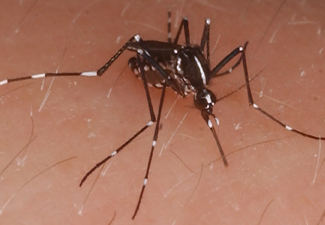 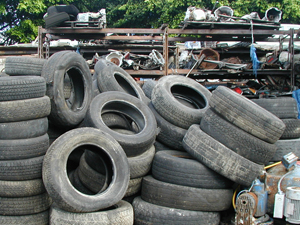 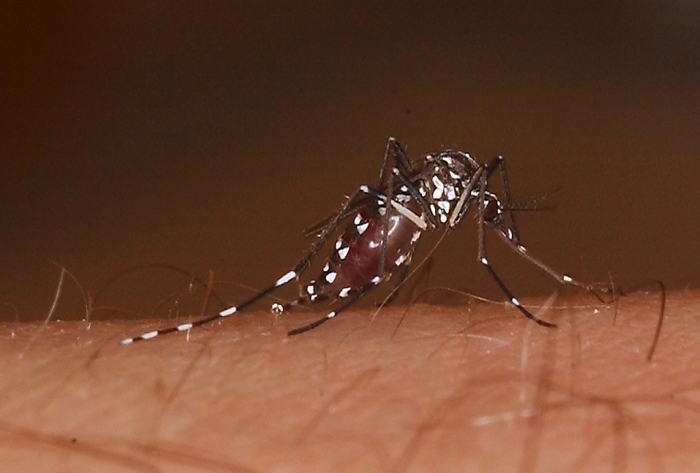 Research in the Armbruster laboratory is focused on understanding processes of phenotypic evolution in natural populations and the molecular bases of adaptation. Our approach to these questions is integrative. We perform a wide range of studies, including field ecology, quantitative and population genetics, and molecular physiology. We are also beginning to use functional genomics approaches.

We are currently focused on the studying the Asian tiger mosquito, Aedes albopictus, as a model system. This mosquito is considered among the most invasive mosquito species on Earth and is also of considerable medical importance as a vector of Dengue fever, Chikungunya, and a number of other arthropod-borne viruses. Aedes albopictus has an unusually broad geographic range, including tropical populations that are genetically incapable of undergoing photoperiodic diapause, and temperate populations that exhibit a robust photoperiodic diapause response.  Aedes albopictus, invaded the United States in 1985, and has since spread to the southern tip of the Florida peninsula, and as far north as New Jersey, Ohio, and Illinois (a range of approximately 15 degrees of latitude). We are studying the invasion and range expansion of  Ae. albopictus as a natural experiment in order to address the following sorts of questions:

With support of a recent grant from the National Institutes of Health, we are currently collaborating with Gisella Caccone at Yale and Jacob Crawford at Verily Life Sciences to conduct a world-wide population genomics analysis of Aedes albopictus.  The goals of the project are to determine the global invasion history of Ae. albopictus and identify SNP markers that will be used to build a “SNP chip” for rapid genotyping.  The SNP chip will provide a valuable resource to the Ae. albopictus research community that can be used to investigate a wide range of biological processes, including the genetic basis of vector competence and insecticide resistance, as well as determining the origin of new invasions.  We will also use these data to conduct a comparative genomics analysis of tropical (non-diapausing) vs. temperate (diapausing) populations of Ae. albopictus, as well as a large-scale GWAS study to determine the genomic basis of diapause (see below). Whole-genome sequencing is currently underway and the SNP chip design will be initiated soon. 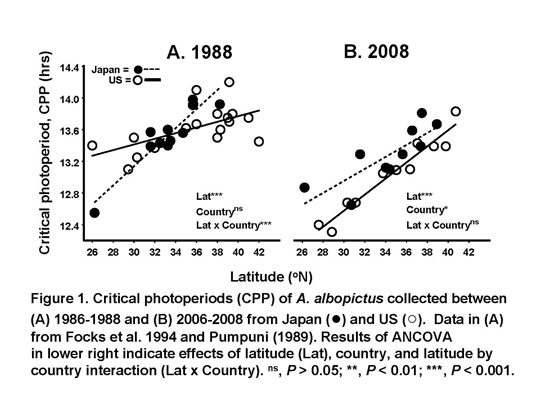 Most of our work examining evolutionary dynamics during invasion and range expansion involves sampling populations from across latitudinal gradients in both the native (Japan) and invasive (US) ranges of Ae. albopictus and then performing “common garden” experiments to elucidate genetic differences among populations. In the native range (Japan) populations have been established for millennia, whereas in the invasive range (US) populations are evolving in response to novel biotic and abiotic selection pressures encountered as the specie’s range has expanded. The invasion and range expansion of Ae. albopictus thus represents an outstanding opportunity to determine mechanisms of climatic adaptation during the early stages of range expansion across a broad climatic gradient, with the rationale that parallel clinal variation in the invasive and native ranges would provide strong evidence of a deterministic (selection) rather than stochastic (genetic drift) process mediating population differentiation. We have recently completed a study demonstrating rapid evolution of the timing of photoperiodic diapause during the range expansion of Ae. albopictus in North America (See Figure 1 above and Urbanski et al. 2012 for additional details). Photoperiodic diapause refers to the ability of insects to measure day length (photoperiod) as a cue for initiating seasonally appropriate patterns of dormancy. Photoperiodic diapause is a fundamental adaptation to survival during the unfavorable conditions of winter in a wide variety of temperate insects. The timing of diapause initiation is usually measured as the “critical photoperiod” (CPP). The CPP of a population is defined as the number of hours of light in a day that initiates diapause in 50% of the population. Shortly after the invasion of the US by Ae. albopictus, C. Pumpuni, W. A. Hawley and colleagues collected populations from across a broad geographic range in both Japan and the US. After several generations of laboratory husbandry to control for field effects, they measured the CPP of populations under common garden conditions (Figure  1A, above). CPP increases from south to north in a wide variety of insects, and the adaptive significance of this latitudinal variation is well understood. In the northern hemisphere, the length of the growing season declines as one moves north, and the optimal timing of entry into diapause occurs earlier in the year due to the early arrival of winter at northern relative to southern latitudes. Figure 1A (1988) shows a strong cline of CPP in Japan, but the relationship between CPP and latitude is much weaker in the US, implying that 2-3 years after the US invasion, US populations were not yet locally adapted. We repeated this experiment with populations collected from across a similar geographic range in 2006-2008 (Figure 1B, above), taking care to use methods that matched those from the 1988 experiments as closely as possible. Our results showing parallel clines of CPP in the US and Japan in 2008 demonstrate rapid adaptive evolution of CPP in US populations across an approximately 20 year period. Additional details regarding this study can be found in Urbanski et al. 2012 (see publications page). We are currently seeking to identify additional elements of the diapause response that we suspect may be important to adaptation across climatic gradients. 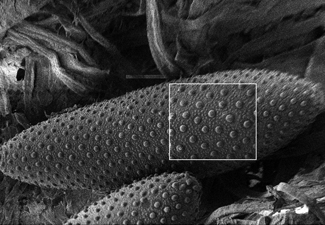 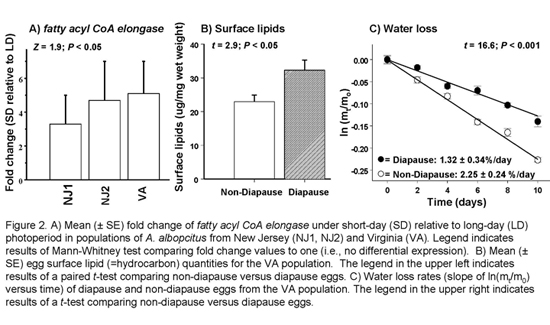 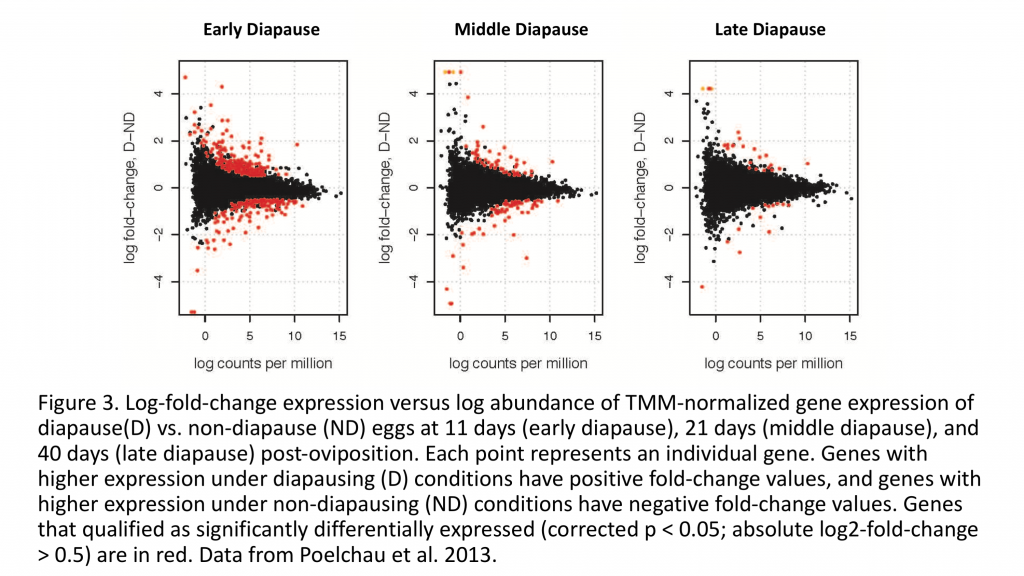 Despite the well established ecological significance of photoperiodic diapause, the molecular basis of this critical adaptation remains largely unresolved. In addition to experiments investigating evolutionary divergence of diapause traits AMONG populations (e.g., Figure 1, above) we are also investigating the molecular and physiological basis of the photoperiodic diapause response WITHIN populations. In Ae. albopictus, the adult female is the photosensitive stage, and under the influence of short day lengths female lay diapause eggs in which development arrest (diapause) occurs in the “pharate” (hidden) larva inside the chorion of the egg.

We have recently identified a fatty acyl coA elongase transcipt that appears to be involved in mediating increased egg desiccation resistance during diapause in Ae. albopictus. This fatty acyl coA elongase transcript is consistently upregulated in oocyte tissues under diapause inducing SD conditions (Fig. 2A). Fatty acyl CoA elongases encode highly conserved proteins involved in the synthesis of long chain fatty acids, which are precursors of hydrocarbons. We therefore quantified surface hydrocarbons of diapause and non-diapause eggs from the Virginia population in Fig. 2A and found that diapause eggs contain ca. 33% greater surface lipids (=hydrocarbons) relative to non-diapause eggs (Fig. 2B). We also found a significantly lower water loss rate of diapause relative to non-diapause eggs (Fig 2C). We further demonstrated that the composition of hydrocarbon chain lengths does not differ between diapause and non-diapause eggs. Based on additional comparative evidence and well established functional criteria discussed in Urbanski et al. 2010 (see publications), we conclude that expression of fatty acyl coA elongase and changes in quantity, but not composition, of egg surface hydrocarbons are important components of increased desiccation resistance during diapause in Ae. albopictus. We are beginning to follow up on this work by developing CRISPR/Cas9 tools to perform functional genomics experiments. Additionally, as we begin to identify molecular and physiological underpinnings of the diapause response WITHIN populations, we are starting to examine evolutionary divergence of these mechanistic underpinnings of the diapause response AMONG populations.

We have also used high-throughput sequencing approaches (Illumina) to identify transcriptional elements of the diapause response. Figure 3 illustrates differential gene expression of diapause vs. non-diapause eggs in the early, middle and late stages of diapause.  These data emphasize that diapause is a transcriptionally active state and demonstrate transcriptional convergence with non-diapause eggs as diapause dissipates.  We are currently following up on a number of these transcripts that we think may have particularly interesting diapause-related functions. 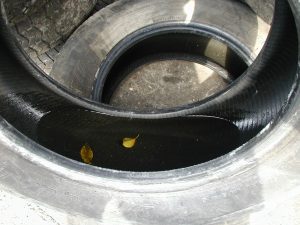 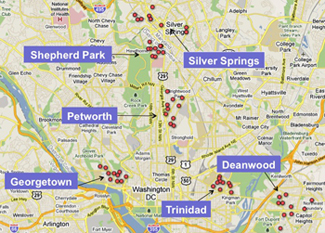 We recently completed an NSF-funded Urban Long-Term Research Area (ULTRA) exploratory award in collaboration with Paul Leisnham and Zara Dowling at the University of Maryland, Shannon LaDeau at the Carry Institute, as well as a number of additional colleagues. The main focus of this project was to understand how socio-economic and environmental variables interact to influence mosquito vector abundance throughout the Washington, DC metropolitan area. In the summer of 2010 we conducted paired residential knowledge, attitudes and practice (KAP) surveys and intensive mosquito sampling in six socio-economically diverse neighborhoods (Petworth, Deanwood, Trinidad, Shepard’s Park, Silver Springs and Georgetown). See Dowling et al. (2013a, b) on the “Publications” page for a description of the results of this work.  Although we are not performing any current studies on this topic, I am interested in pursuing additional urban vector ecology projects in the future.